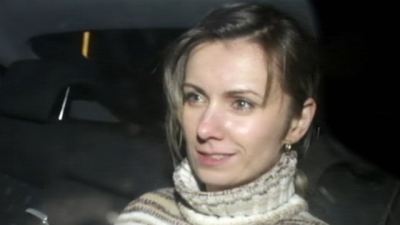 A woman who was buried alive in a cardboard box has told a British court how she used her diamond engagement ring to cut her hands and legs free, and then slash her way out of the box.

Michelina Lewendowska, 27, told her harrowing tale while testifying against her former fiancé Marcin Kasprzak and his friend Patryk Borys, who are both on trial for attempted murder.

Speaking in her native Polish, Lewendowska told the court her fiancé attacked her with a taser in their home last May.

"I was trying to push him away with the taser. He knelt down, he pressed my ribs with his knee and continued to use the taser," she said.

Lewendowska was tasered twice in the neck, bound and gagged, and put into a cardboard computer box, she said.

The woman told the court Kasprzak and Borys taped the box shut, put her in the trunk of a car, then drove her to the woods and buried her, head down, under nearly half a foot of dirt. And left.

Lewendsowska testified that she struggled to breathe, then made use of the only tool she had, her engagement ring. She cut her legs free, then scratched at the box.

"I started to tear the box apart. I was focusing on the opening I had just made. Soil was getting in. My face was getting dirty. I could see some black sky and leaves. I was so exhausted," she told the court.

Lewendowska said it took her a half hour to cut herself out of her cardboard coffin, then flagged down a motorist, who called for help.

Prosecutors say Kasprzak had grown bored with Lewendowska and wanted her out of the way so he could start a new romance with another woman.

His defense attorney argues Kasprzak was only trying to scare his fiance. The lawyer reminded her in court that his client left two hand holds on the box open so she could breathe. But Lewendowska said her former lover did not tape them up because he was in a hurry to bury her.

"I can tell you now that they were not left specifically or intentionally for me to live," she said.

Kasprzak and Borys have pled not guilty to charges of attempted murder.